“Our sages developed music from time immemorial for the mind to take shelter in that pure being which stands apart as one’s true self. Real music is not for wealth, not for honors, or not even for the joys of the mind – it is one kind of yoga, a path for realization and salvation to purify your mind and heart and give you longevity.” 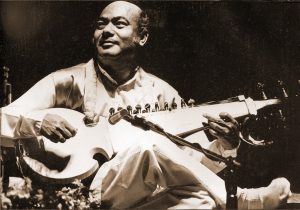 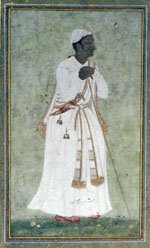 The classical music of North India is among the oldest continual musical traditions of the world dating back thousands of years. Ali Akbar Khan’s father, the late Acharya Baba Allauddin Khan, is acknowledged as one of the greatest figures in North Indian music of the 20th century.  Their family traces its gharana (ancestral tradition) from Mian Tansen, a 16th century musical genius and court musician of Emperor Akbar, to Mohammed Wazir Khan, court musician of Rampur State and Baba Allauddin Khan’s guru. The following is a traditional story about Mian Tansen:

“One day Emperor Akbar asked that Swami Haridas, Mian Tansen’s teacher, be brought to court so that he might hear him. Tansen told the emperor that they would have to go into the forest to hear him, since his teacher would not come for anyone. Even at that, Emperor Akbar had to disguise himself as a servant first, and it was only by Tansen’s intentionally singing a raga incorrectly that the old teacher finally sang to rectify his student’s error. Later, Tansen explained to his royal patron, “I sing for men, but Swamiji sings only for God.” 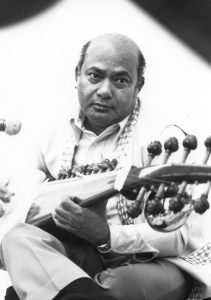 Maestro Ali Akbar Khan was one of India’s most accomplished classical musicians. Though considered a “National Living Treasure” in India, he was admired by both Eastern and Western musicians for his brilliant compositions and his mastery of the sarode. His life took on an epic stature, from a sheltered small town boy, living in the shadow of his great father, to performing in the major classical music venues around the world. He would go on to receive numerous awards and titles, even the elusive MacArthur (genius award). Yet, he always talked about himself with humility. He was known to say, “I am just a music lover,” though concert violinist the late Lord Yehudi Menuhin called Ali Akbar Khan, “An absolute genius…the greatest musician in the world,” and many have considered him the “Indian Johann Sebastian Bach.”

“My father learned from a great teacher, and we always keep the traditional thing – from father to son, son to grandson, teacher to student – like that. What my father learned, I don’t want that to die. It must spread all over the world” 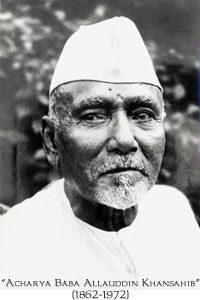 Born in 1922 in East Bengal, Bangladesh, Ali Akbar Khan (Khansahib) began his studies in music at the age of three. He studied vocal music from his father and drums from his uncle, Fakir Aftabuddin. His father also trained him on several other instruments, but decided finally that he must concentrate on the sarode and on vocal. For over twenty years, he trained and practiced up to 18 hours a day. His father was a legendary task master. This meant that Khansahib was groomed to be a musician of the highest degree. Playing with friends and choosing what he would do with his life was not an option for the young Ali Akbar. His father continued to teach Khansahib until he was over 100 years old. He died in 1972 at the age of 105. After his father’s death, Khansahib would continue to learn from his father in his dreams.

“Do you know what true music is? To a musician, music should be the Supreme Deity who will be worshipped with the eagerness of an undivided mind, and tears shall be his ritual ingredients” 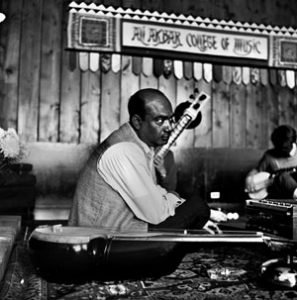 Ali Akbar Khan gave his first public performance in Allahabad at age thirteen. In his early twenties, he made his first recording in Lucknow for the HMV label, and the next year, he became the court musician to the Maharaja of Jodhpur. He worked there for seven years until the Maharaja’s untimely death. The state of Jodhpur bestowed upon him his first title, that of Ustad, or Master Musician.

At the request of Lord Menuhin, Ali Akbar Khan first visited the United States in 1955 and performed an unprecedented concert at the Museum of Modern Art in New York. He also made the first Western LP recording of Indian classical music, and the first television performance of Indian music, on Allistair Cooke’s Omnibus, sowing the seed for the wave of popularity of Indian music in the 1960’s.

Khansahib founded the first Ali Akbar College of Music in Calcutta, India, in 1956. In the early 1960’s he was asked to teach a group of Mother Superiors at McGill University in Montreal Canada. With them he explored the similarities between Gregorian chants and the old dhrupad style of North India. 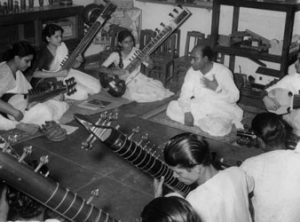 In 1965 he came to Berkeley, California, to teach for the Asian Society of Eastern Arts. Little did he know then that he would remain in California, spreading the teachings of his father. Recognizing the extraordinary interest and abilities of his Western students, he decided to open his own school where he could teach on a regular basis.

In 1967, he founded the Ali Akbar College of Music, which moved to Marin County, California, the following year. He then maintained a regular teaching schedule of 6 classes a week, 9 months of the year for the next 40 years. 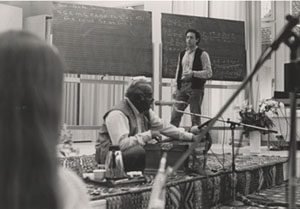 Khansahib also opened a branch of his college in Basel, Switzerland, that is still run by his disciple Ken Zuckerman.

Khansahib composed and recorded music for films throughout his career. He composed extensively in India beginning with “Aandhiyan” by Chetan Anand (1953) and went on to create music for “House Holder” by Ivory/Merchant (their first film), “Khudita Pashan” (or “Hungry Stone”) for which he won the “Best Musician of the Year” award, “Devi” by Satyajit Ray, and in America, “Little Buddha” by Bernardo Bertolucci.

Baba Allauddin Khan left behind such a wealth of material that Khansahib felt he was always learning new things from his father. Khansahib continued his father’s tradition, that of the Sri Baba Allauddin Seni Gharana of Maihar and Rampur, India. Now, his family and students in California are continuing with this treasure trove of music. After securing the preservation of this vast tradition, the work of training the future students will have something that the classical world has yet to experience; a wealth of audio recordings directly from the source of the tradition. The music will continue.